In May of this year, nostalgia hung heavy with the re-launch of the once ubiquitous Nokia “Brick” 3310. With many new features and marketed by a different company, HMD Global, whom now holds the rights to Nokia, it was not the same model that had taken the world by storm in the early 2000s, however the look and feel were the same. Whilst nostalgia was Nokia’s key marketing factor, it didn’t do as well as expected in a fiercely competitive market. Now, Nokia is stacking up against the competition with its much awaited flagship device – the Nokia 8.

The Nokia 8 will be the first model ever under the brand to run Android with a 10nm Qualcomm Snapdragon 835 processor. Many other popular smartphones like the OnePlus 5, Samsung Galaxy, Moto z2 Force currently use this processor, putting Nokia in a position to compete with their greatest rivals. The new device also includes a 4GB RAM and will have 64GB of internal storage as well as a micro SD card slot that will support up to 256 GB more storage space.

Nevertheless, the 64GB storage space has caused mixed reviews in terms of meeting the flagship-level specification, since 128GB and 256GB storage options are slowly becoming common with the likes of Apple and Samsung including these vast storage options to their devices. 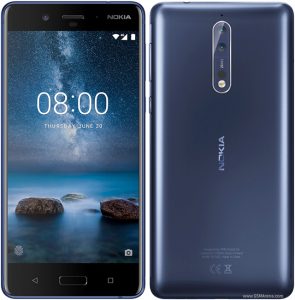 In a time where phones are getting bigger, Nokia opted for smaller with a 5.3-inch (2,560 x 1,440 resolution) IPS display, potentially appealing to a demographic of users who find 5.5-inch display phones a bit too big. Nokia 8 also sports a Gorilla Glass 5 layer and has a 3,090mAh battery, which also supports QuickCharge 3.0 via USB Type-C port, adding durability to it.

Nokia 8’s all-aluminium chassis will be available in four colour options including Blue, Steel, Gold/Blue and Gold/Copper, all of which offer IP54 waterproofing protection. A big step-down from the IP68 that Samsung Galaxy S8 and the LG G6 offer customers. 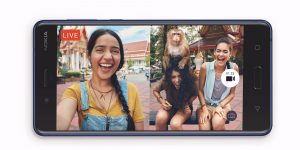 A key feature of the Nokia 8 is its rear dual camera. Both cameras feature 13-megapixel sensors, but one is for colour and the other is for monochrome, offering more sharp and vibrant images. They are also equipped with Zeiss brand lenses, complete with a wide f/2.0 aperture, a support optical image stabilisation (OIS) and phase detection focus. This is rather impressive and the same can be said about the front-facing camera, which shares the same features.

These camera features may be enough for the perfect selfie; however, Nokia is introducing the “Bothie”, nickname for the Dual-Sight feature. This is Nokia’s new take on the selfie, which allows users to use both the front and back camera in a spilt screen. The dual-Sight will allow users to take photos and stream videos, which can be shared directly on platforms such as Facebook or YouTube.

The company believes that the Bothie feature could be a game changer in how we share our lives online. Juho Sarvikas, chief product officer at Nokia, states,

“People love to share and tell stories. Nokia 8 is designed for anyone who wants to simultaneously capture and share high quality footage”.

The Bothie is not the only new feature; Nokia 8 will also come with improved spatial audio technology. The new device will use the 360-degree OZO technology used in Nokia’s high-end OZO 360 camera, which can play back sound in multiple directions, imitating how it was captured during recording.

With its new features it may be worth the flagship tag after all, but would it be able to compete in the Apple and Samsung dominated market. The Nokia 8 will be available for purchase in September and will be priced at €599.

Will Biodegradable Cars Be the Vehicles of the Future?The third revolution in warfare may be upon us