The rise of electric cars such as the Nissan Leaf and Elon Musk’s Tesla have given us a taste of the eco-friendly future the world requires. The potential for fully electric vehicles is enormous with EU and UK regulatory bodies attempting to switch all vehicles over to fully electric power sources by 2040. 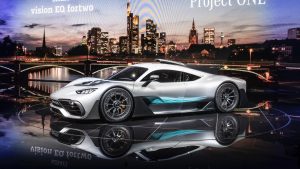 The Mercedes-AMG Project One is a plug-in hybrid hyper car, based off a formula 1 car. It boasts a total output of 1000 horsepower and a turbocharged V6 engine. The wheels are then worked by three electric motors and a fourth electric motor has been incorporated into the design to drive the turbocharger. In total, the vehicle will be able to reach speeds of up to 217 miles per hour and an acceleration of 0-124 miles per hour in less than six seconds. Mercedes latest project will set you back $2.7 million and has already been bought by 275 people.

For the more affordable market, Mercedes have also unveiled their concept EQa car. This completely electric vehicle was seemingly made to competing with the Tesla Model 3. At a range of 249 miles per charge, the EQa can drive further than the base Model 3 but less than the long-range variant. Powering the EQa is two electric motors, with scalable components, allowing the vehicle’s system to travel an additional 100 miles. Although still very much a concept car, Mercedes have shown their intent, and a fully electric hatchback will soon be in the German company’s line-up of products. 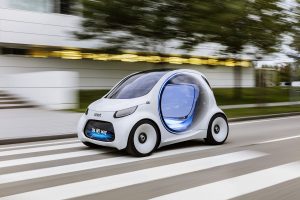 Smart has unveiled their concept for a totally electric car. The vehicle is idealised to have a complex, autonomous infrastructure so each Smart car can interact with another Vision EQ. This creates a form of “swarm intelligence”, allowing a car-sharing network to be set up. The network would theoretically allow users to call a car and all Vision EQ’s on the road will communicate to decide which will be able to collect a user quickest.  The car will lack a wheel and pedals, making it not only totally electric but also fully autonomous.

Last year Volkswagen’s electric car division, ID, unveiled their first car at the Paris Motor Show. More recently, however, the VW ID Buzz has been unveiled. This electric minibus is destined to go on the market in a few years, fitting the niche of being both able to transport large numbers of passengers, as well as being fully electric. 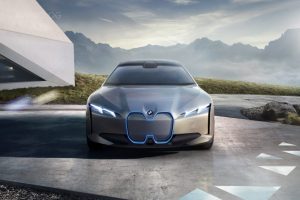 BMW’s electric division, called BMW i have already noted successes with the supercar BMW i8. Recently though they have unveiled a new concept. The BMW i Vision Dynamics Concept shows off a more sensible sedan design with a range of 373 miles, and a zero to 60 time of just below four seconds. The Tesla Model S has monopolised the luxury electric market for five years now, but now this monopoly looks under threat.

Diesel and petrol are looking more and more like the fuels of the past. The coming years will bring new electric motors and vehicles that will shape the future of car use.

iPhone X: Apple’s tenth anniversary iPhoneThe record for the furthest distance driven on one charge has been set