Proterra, a California based company, has smashed the record for longest distance driven on one charge by an electric people carrier. At 1,102 miles, the Catalyst E2 Max bus will pave the way for commercially available electric powered public transport. As more and more cities around the world seek a solution to the threat of air pollution, Proterra has shown that an electric battery is a viable source of clean transport. The previous record of 1,014 miles driven on a single charge was set by a lightweight car that was 46 times lighter than Proterra’s Catalyst E2 Max, showing off the company’s feat.

There’s a feeling amongst electric vehicle manufacturers that this accomplishment may pave the way for more heavy-duty electric vehicles such as trucks or luxury coaches. Ryan Popple, chief executive of Proterra, stated, “As we see incumbents and more companies enter the heavy-duty [electric vehicle] EV market, it has become very apparent that the future is all-electric, and the Sun is setting on combustion engine technology,”.

The vehicle itself holds a 660kWh battery inside a 40-foot bus. To put this into perspective, this is over six times the capacity of a Tesla Model S P100D. A vehicle that is able to travel over 300 kilometres on a single charge. Now, this is a hard comparison to make as a bus is a lot larger than a car, however, it does show off the triumph Proterra has attained. This model is able to house 77 passengers. Currently, the company hasn’t sold any of the 40-foot E2 Max but roughly 400 smaller buses have been sold to councils, universities and transport firms across the United States with plans to sell more. These are still early days however, and it is probable we will see Proterra transports in the UK and Europe in the years to come. 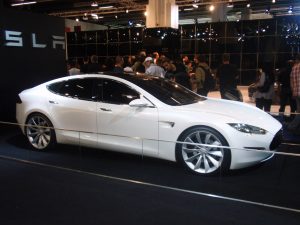 Proterra have formed a relationship with Foothill Transit in Southern California, supplying them with buses that have a range of only 35 miles, however, they can be recharged in ten minutes. In theory, this would mean the fleet could recharge in small increments at each stop along the buses’ route, allowing it to travel longer distances. This model is 35 feet long, allowing for many passengers.

The company has been at the forefront for larger electrically powered vehicles for many years. Its EcoRide BE35 was the first 30-foot or larger all-battery electric bus to be tested at the federal testing track and complete it. To top this achievement, the BE35 also became the first fast charging transit bus to be commercially viable and to meet California’s Zero-Emission Bus Rules. 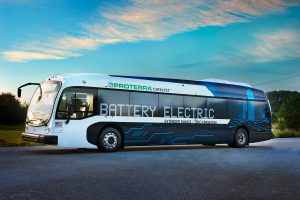 With the EU and other countries around the world setting tough emission targets, it would seem that fleets of electric buses and trucks will become the norm in years to come. Currently, London has the most environmentally friendly fleet of buses in Europe, with over 2,500 hybrid electric buses in operation. With companies like Proterra in the market, it would seem that this trend is only going to increase.