Up to now, Search Ads are offered in Australia, New Zealand, US and UK, having initially been released in 2016 for US and earlier this year for the remaining three.

According to Apple, this provides “an efficient and easy way to promote your app”.

Apple has also detailed the benefits associated with the use of Search Ads stating that “65% of downloads come direct from a search on the Apple Store” and 70% of App Store customers use search to discover apps.

With the existing success of Search Ads in current countries and the expansion into new countries, it has created new opportunities for developers. This includes offering $100 credit to eligible developers to use toward their first campaign, where they will receive a promo code via email when they first sign up.

This must be used by October 31, 2017, and can only be applied to the purchase of Search Ads products and services on the App Store. By providing this opportunity to customers, Apple can drive discovery in the App Stores in specific regions from a mobile device. 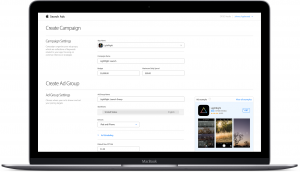 The Search Ads are priced as a cost-per-tap (CPT) model, so developers only pay when a user taps on the ad.

When speaking on this matter, Apple said, “The actual cost of a tap is a result of a second price auction, which calculates the CPT you pay based on what your nearest competitor is willing to pay for a tap on their ad, up to your maximum CPT bid”.

Frank Vitetta from Orchid Box International marketing agency states, “Finally Apple is moving into new market after testing in the US and UK. We were one of the first agencies to take advantage of the platform when launched. We run campaigns in the US for a couple of apps and have had amazing results. Early adoption is key, you get amazing visibility spending a few dollars.”

“if you have an app on the App Store, this is the best and most efficient way to gain traction.”

“Make sure you have keywords that you are bidding on in you actual app description and keep track of all keywords Apple is sending you, some are completely different from the one you are actually bidding on,” Vitetta explained.